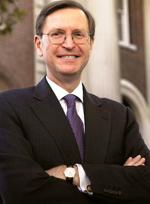 Dean of the Columbia University Graduate School of Business

View all Articles by Glenn Hubbard

Glenn Hubbard at the Issues Forum

Economic growth in real terms is averaging a meager 2.2% annual rate in the 23 quarters since the recession’s trough in June 2009. The consensus forecast of about 1% growth for the first half of this year offers little solace. Americans need not be resigned to such a dim fate. A clarion call for faster […]

Abraham Lincoln would be embarrassed about the polarization of U.S. politics today, 150 years after his assassination. Make no mistake, Lincoln was a polarizing president. His election was the pretext for secession by southern states. He refused to compromise even as the magnitude and duration of the Civil War grew. But Lincoln was polarizing because […]

A Financial System Still Dangerously Vulnerable to a Panic

Dodd-Frank restrictions on the Federal Reserve’s powers to act as lender-of-last-resort, coupled with restrictions on federal guarantees for bank deposits and money-market funds, pose a threat to U.S. and global financial stability. The heart of the 2008 crisis was a panic following the bankruptcy of Lehman Brothers. Due to its losses from this bankruptcy, the […]

The season of policy ideas is upon us in the US, with significant consequences for the nation’s economic future. President Barack Obama offered his economic suggestions in his recent budget. And presidential aspirants from both parties will soon be offering their own thoughts on how to advance gross domestic product, household incomes, and other objectives. While this […]

The Unemployment Puzzle: Where Have All the Workers Gone?

A big puzzle looms over the U.S. economy: Friday’s jobs report tells us that the unemployment rate has fallen to 6.7% from a peak of 10% at the height of the Great Recession. But at the same time, only 63.2% of Americans 16 or older are participating in the labor force, which, while up a […]